We’ve had five consecutive days of rain last week, three of which had more than half an inch recored at the airport. Even with all this rain we are below average for the month but well above average for the year.

Here are the numbers so far:

*July’s rainfall totals were only recored through July 17th and does not include the entire months rain totals.

As shown above, the rainfall for this year has been well above normal. We’ve received over nine inches of rain above normal values so far! The graph below shows you how many inches of rain we have received per month. This is even with the incomplete data of July, which is skewing the overall totals. 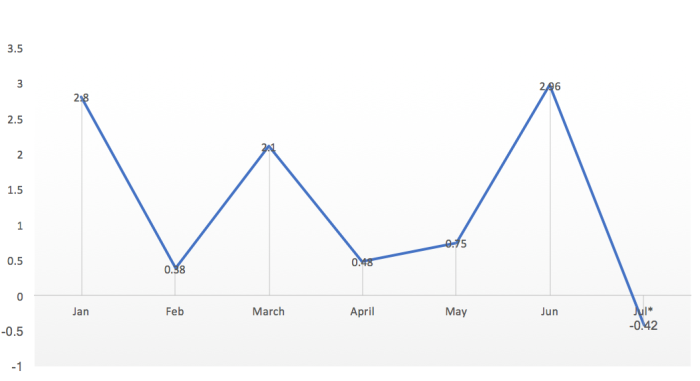 If we were to take July out and just look at the first half of the year, on average we’ve been 1.58 inches of rain above normal per month. If you applied that number to the second half to the year, we would have 29.71 inches of precipitation from July through December. Giving us a yearly rainfall total of 59.82 inches.

That would put this year as the wettest year on record by 5.81 inches!

Now hold on. We have to understand that it’s almost impossible to know if this trend will continue, but the numbers so far have been impressive. Only time will tell if we keep up this trend or not. However, at this rate we are definitely in range place in the top ten wettest years ever recorded.