Last Saturday I walked into work and there was a voicemail left for me from a man named Matt. He lived in Girard, Ohio. Now Girard was the same city that got hit by a severe thunderstorm just a day before. After explaining the damage his neighborhood took, during that storm, he then told me that I need to come out to see the destruction for myself.

I called him back and set up a time to go out there to check out the storm damage. When someone tells you that a storm rolled through and snapped a large oak in half, you have to see that for yourself. So I went out there and what do you know. This is what I saw. 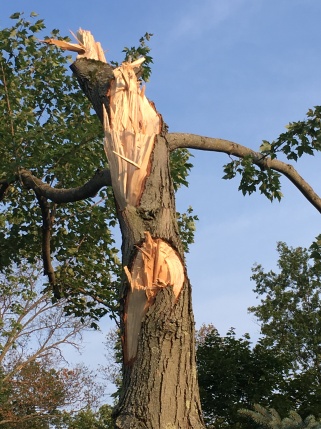 Over a dozen live oak and pine trees, most healthy, either snapped in half or completely uprooted. The damage was in a consecrated area too. No more than a quarter mile in length and a hundred yards wide. What was interesting about the damage was that there was no structural damage to the homes in the area. Plus all the trees that fell or snapped were at least 25 feet tall.

Here were some of the pictures that I took that shows the extent of the damage. 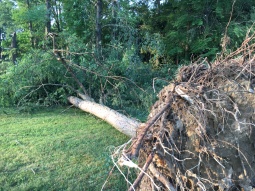 All the trees were laying in same direction; northeastward. It was a concentrated area, like a path of a tornado, but this did not have the characteristics of tornado damage. All the roofs had no damage and smaller trees looked untouched for the most part. What if a funnel cloud just scrapped the top of the trees?

Again it wasn’t likely because the trees would have fell in different directions. The large trees that toppled would of been laying not only northeastward, but also west. Which means that we would be looking a few trees on top of houses. It looked like a wind gust around 60-70 mph mixed down close enough to the surface where it knocked over the trees.

As I was leaving Matt asked me what I thought it was. I paused for a second, knowing that he fully believed a tornado moved through his back yard. Before I could speak Matt got the hint of what I was going to say. That’s when he spoke up and told me “It doesn’t matter what you say it was, I know what I saw.”

On paper this will go down as a strong wind gust. However, you don’t need me to tell you how a storm affected you. For Matt’s neighbor who took shelter her basement this looked and felt like a twister. I’m not going to sit here and correct the people in Girard. I’m far more concerned about your safety. Storms impact us all differently. As long as you take the necessary steps to insure your and your families safety during severe weather events, that’s all I can ask for.

So the next time a severe thunderstorm warning is issued for your area remember the damage straight line winds can cause. Remember a severe thunderstorm is stronger than 58 mph, a EF-0 tornado can start around 65 mph, and tropical storm begins around 40 mph. These are strong damaging winds no matter what the cause.

Scientifically I will always strive to be correct but personally I just want people to take all warnings seriously. In the end you’re the one affected by the storm. Who am I to tell you what you did or did not feel.