“Ryan I do believe we have a tornado on the ground right now! This is a very dangerous situation” -WKBN Chief Meteorologist Paul Wetzl

If you were following WKBN’s live stream just after 7:00 Thursday night this was the image you saw. Chief Meteorologist Paul Wetzl and Meteorologist Ryan Halicki, from our sister station WYTV, were loading the skycam from the YNG/Warren Regional Airport when they saw the twister. 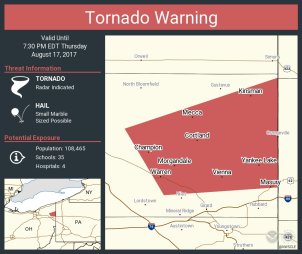 Shortly after, within the estimated time of 7:11 pm to 7:21 pm, a tornado touched town in  Fowler, Ohio. The next day the National Weather Service sent out a crew to asses the damage. A few hours later they posted this statement: 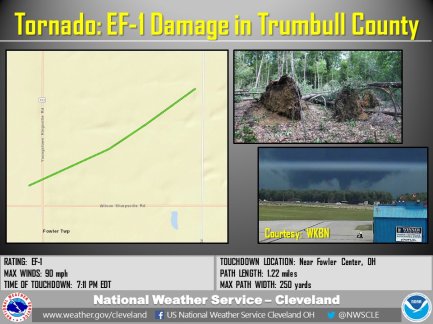 The final conclusion was that an EF-1 tornado was on the ground for a little more than a mile with winds up to 90 miles per hour. The last tornado that touched down in Trumbull County was August 5th, 2012. However, the last F-1 tornado to hit the county was May 15th, 1986.

One thought on “Final details on Trumbull County Tornado”