Just before 7:00 pm on Sunday November 5th, 2017 a storm started it’s trail of destruction in Boardman, Ohio. Minutes later it was over. The path was just over 2 miles in length and less than a quarter mile wide.

So, what was it that destroyed parts of the city? Let me provide you the evidence and let you decide. 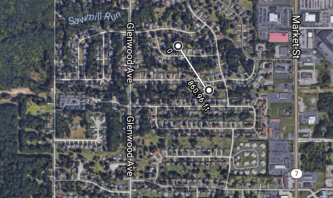 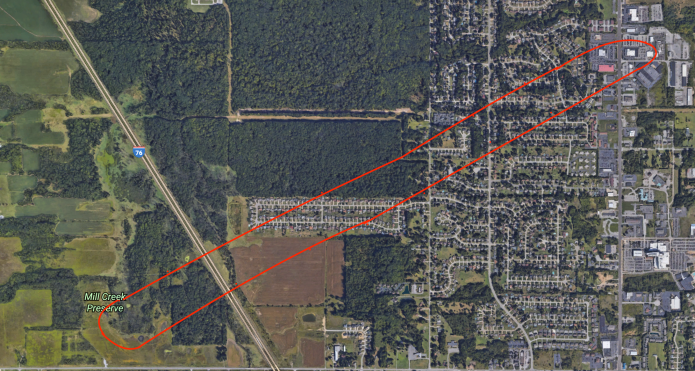 Walking around Mill Creek Preserve it was evident where the description started. There were different locations indicating high winds had reached the surfaced and raced Northeastward. 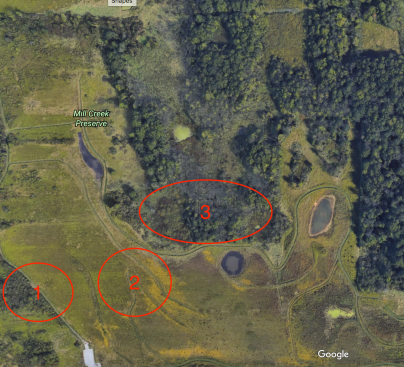 Location 1: There were several tall bushes that had been blown over on the paths. Small branches were snapped off or the whole bush had been knocked over. All were toppled over and were laying in an east-northeastward direction.

Location 2: In this location there was only tall grass. It was evident that winds had snapped most of the grass or knocked it over. Once again, the grass was laying in a east-northeastward direction. There was no indication of swirling.

Location 3: This is where the extent of the damage was located on the Preserve. Large trees were knocked over or snapped about half way up. A dozen to two dozen trees were damaged in this location. Most were laying northeastward but some were laying in multiple directions. 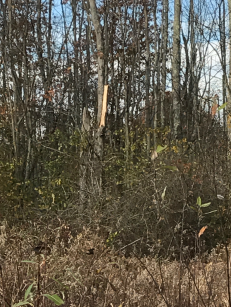 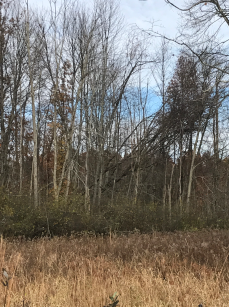 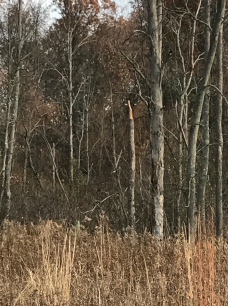 The residential neighborhoods took a direct hit from Hitchcock road to Shorehaven Drive. There were several trees on homes and roofs. 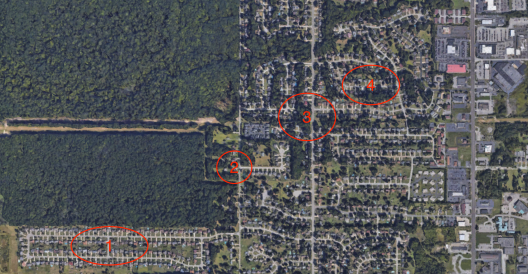 Location 1: Away from the hardest hit area there were no large trees located in this residential neighborhood. However, some houses had the gutters ripped off. Two homes sustained roof damage and several smaller trees were splintered or uprooted. It was evident that strong winds had pushed through, but the extent of the damage was far from the other locations.

Location 2: Near the intersection of Hitchcock Road and Gardenridge Court there was extensive damage, but this was away from the area that received the most media attention. There were several massive oak trees that had fallen. Luckily none had fallen on any structures. The way in which they fell were in multiple directions. Across the street on Gardenridge Court there were a few trees that were uprooted and laying in a northeastward direction. A half dozen homes off that road suffered roof damage on multiple sides of individuals house. This intersection is only significant location where there was evidence of rotation.

Location 3: At Glenwoods Court and Glenwood Ave the damage was widespread. There was multiple trees down everywhere and some where on top of houses. Most trees were uprooted but laying in a northeastward direction. Power lines were torn down and widow makers were left dangling from the trees. This is where the winds started to peak. 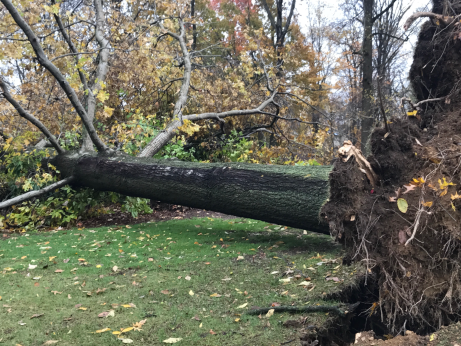 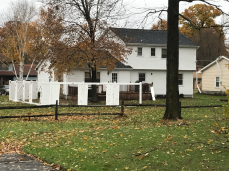 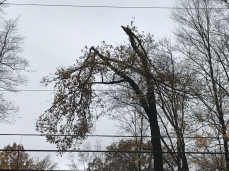 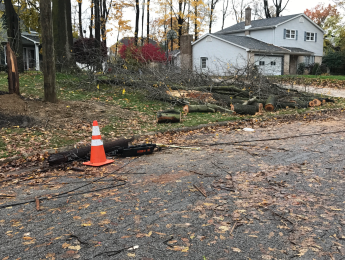 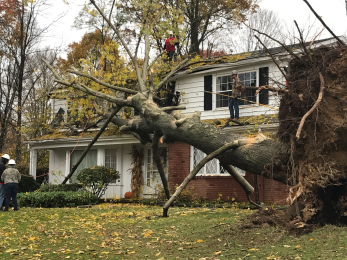 Location 4: This area was by far was the hardest hit out of all four locations. In some yards no trees were left standing. The majority of the trees had fell in a north, east, or northeastward direction. There was only one tree the fell westward. The center of destruction was in the back yards of Green Bay Drive and Shorehaven Drive. Trees had gone through roofs and destroyed entire sheds. There were multiple homes with structure damage in this location. 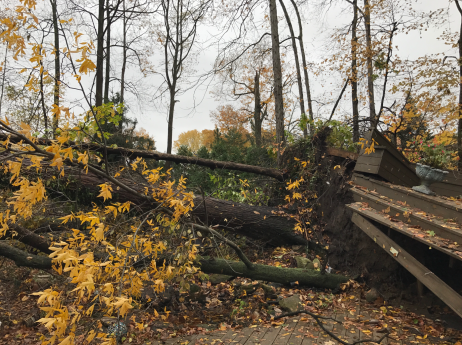 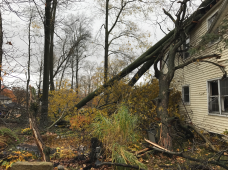 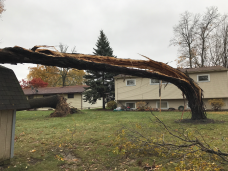 Lastly the storm continued its northeastward track and crossed over market street. What was interesting about this location is that only three businesses sustain damage. The Ethan Allen furniture shop, Sweeney Buick, and Simon roofing were the only buildings with structural damage. There was also a garage on Karago Ave that had the door blown off and the sign in front of King Collision was damage. 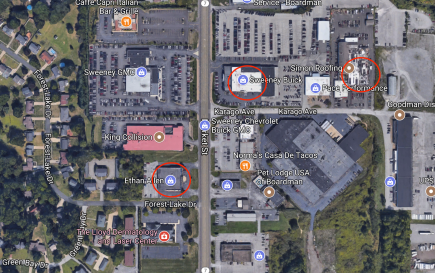 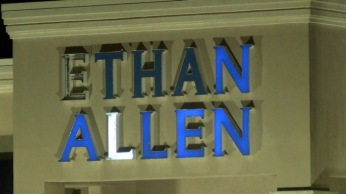 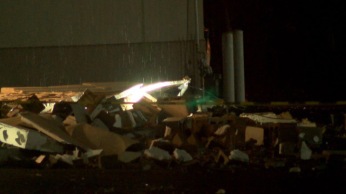 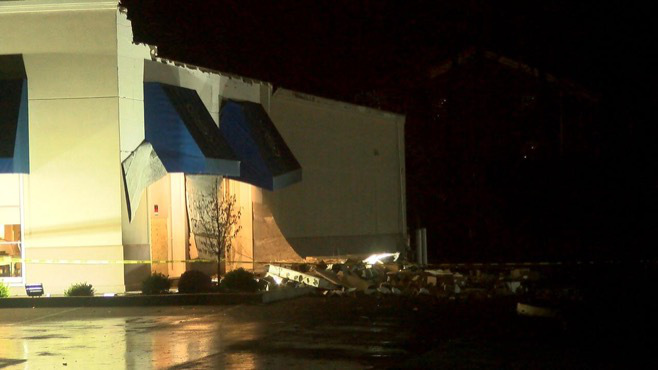 Sweeney Buick: This was the hardest hit structure out of the entire path. However, the back of the dealership was not built to withstand 100 mph winds. A building like this could have had hurricane straps to hold down the roof in the case of strong winds. This building did not have them installed. To make matters worse the southern side of the building was mainly garage doors which easily caved in and allowed the winds to rush in. Once the winds were inside the pressure build up was so great the roof blew off. Its hard to say which way the wind was coming from but workers described the damage as if the roof was “peeled off”. There were also parts of the sign out front that were lodged in the side of the building. 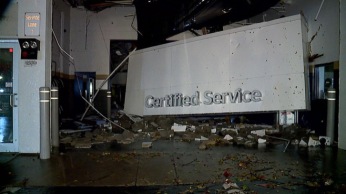 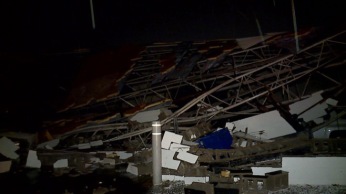 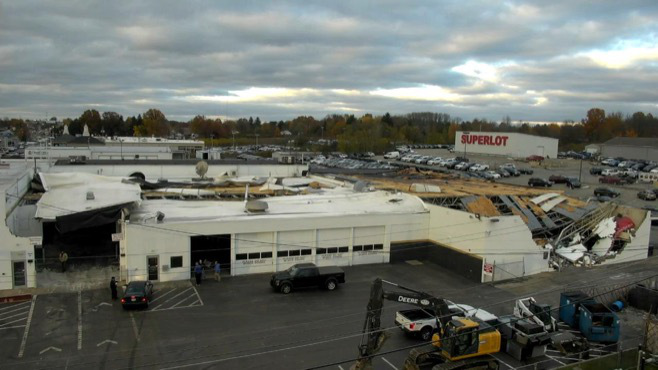 Simon Roofing: This building also suffered roof damage. It was peeled off just like the back end of Sweeney. Part of the roof collapsed which fell northeastward.

If we were to focus solely on the path of the storm there would be no doubt that it was a twister. On the other hand, looking only at the damage I would say we are looking at a straight line wind event. Since my last report on Tuesday I have personally visited every location two more times. This was going to be a tough call, no matter whether the National Weather Service ruled it a tornado or straight line winds.

I spoke with the National Weather Service on why they made that call. They told me it was a tough call, but there was more evidence that supported a straight line wind event. Looking over everything there was evidence to support both claims, but unless someone has a picture of a tornado on the ground in Boardman this will stay classified as a microburst. It is one of those calls that need indisputable evidence to overturn and there is not enough of it at this point.

At the end of the day I just want everyone to be safe and heed the warnings for severe weather.

One thought on “What Hit Boardman, Ohio?”