The damage last Friday in Mercer County was caused by a downburst. 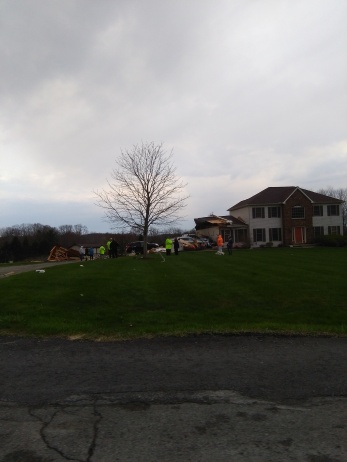 On Friday, the air near the ground was extremely dry. When the showers moved in the initial rain fell from the clouds, but did not make it to the ground. The dry caused the raindrops to evaporate. There is something important that happened at that point.

The process of evaporation is endothermic, meaning that the evaporating raindrops take in heat from the atmosphere. Now imagine this happening millions and millions of times above your head. If all these drops are taking in heat then the air around it will cool and quick.

Cold air is denser than warm air. So the colder the air gets the heavier it becomes. Eventually, the rain breaks through the dry air and when this happens the cold air comes crashing down to the surface and can cause damaging winds.

If you were out in the windy conditions, the wind probably felt colder to you.

There are different types of severe winds.

A downburst is a strong downdraft which causes damaging winds on or near the ground. This term is commonly used when the size of the downdraft is not known or the damage is sporadic. When the size and scale is known, we categorize them into two types of downbursts:

Microburst: this is a downburst that is less than two to three miles in size. It covers a concentrated area and can produce winds over 150 mph.

Marcoburst: this is a downburst that is more than two to three miles in size. It covers a concentrated area and can produce winds over 125 mph.

For example, if there was a damage swath of 3 by 4 miles and also produced heavy showers at the time of the damage, we would classify that as a wet macroburst.

These are winds that are generated by a storm. Unlike a downburst, these winds can be produced and sustained for hundreds of miles and go on for hours. The winds can exceed 100 mph and produce as much damage as a tornado.

Straight-line winds are often mistaken as tornado damage, but there is a distinct way to tell the difference. All the damage, due to straight-line winds, would be in the same direction. All the trees would fall the same way and lawn furniture would be pushed into one corner of the yard.

The most well-known severe weather. Tornado damage is concentrated and the path is typically longer than it is wide. Tornados can be destructive, but also sporadic in their damage path.

You can clearly identify damage caused by a tornado because the debris would be all over the place. Trees would be laying in opposite directions and structures would have damage to multiple sides of the building.

As we head into severe weather season it is important to know the different types of severe winds. It is as equally important that you treat severe thunderstorm warnings the same way you would treat tornado warnings.

People don’t think that severe thunderstorms can be worse than tornadoes at times. At the end of the day, we don’t care what caused the damage, as long as everyone is safe.